Every issue resembles a coin. The issue along with itself carries two sides. For it or against it. The recent “revolution” at BITS Pilani , of which I happen to be a part of definitely does not resemble a single coin or an issue which is at dispute. The three sides symbolically represents the three major parties involved in solving the issue of fee hike : The Administration, the alumni and the students on campus. Among all revolutions that have graced this earth, ours was really unexpected given the time of occurrence (being in the middle of the final semester exams) and the people involved (BITSians). We are not a hostile set of people. You can hardly ever see a BITSian on campus spreading radical thoughts or engaging in violence. Even if you try to incite one of us possibility is we will take “lite” your insults and be done with you. NO RETALIATION whatsoever.

The 6th of May was different. I now probably know the frustration because of which a protest commences. People were out in large numbers to question authority. They wanted answers. They wanted to be heard.

As a back ground to the following text I would like you all to look at the fee hike trend in BITS over the last few years. 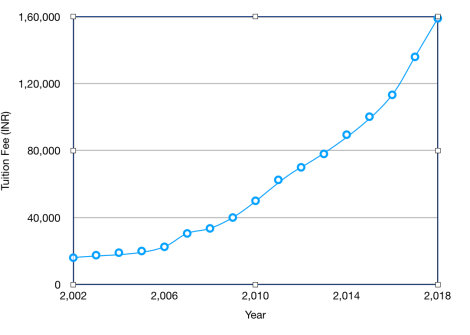 This curve closely resembles a mathematical function called exponent. I was indeed taken back when my machine calculated the R-squared (R2 ) statistic the curve was 99% in line with an exponential curve. A R2 value that I couldn’t achieve in first-order chemical kinetics experiment. 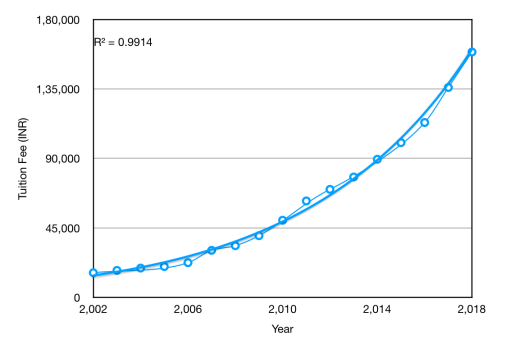 Why this statistic ? Using data from calculatorstock.com one can create the following table. 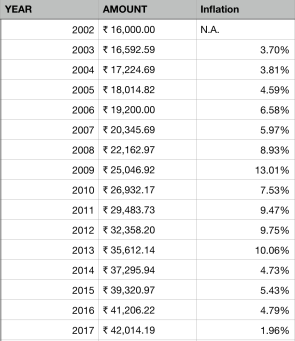 Keeping the scale same we can plot the above data conclusively and find that the R2 statistic is way off than the one we are familiar with. This kind of resembles my Chemistry lab work. 😛 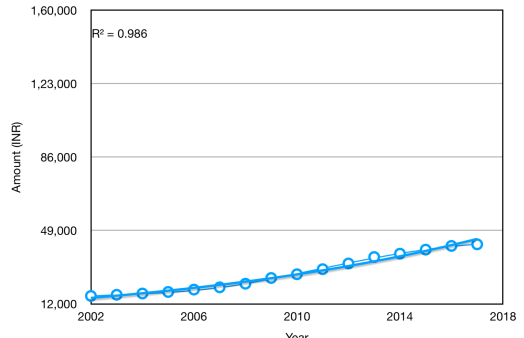 I might be oversimplifying data here. Given that we consume products on the high end of the inflation range (softwares , lab chemicals, machines etc.) average inflation might not do justice. Adjusting the inflation to around 9% every year we would get a an amount of INR 63,524 which is around INR 1 lac less than what we would be paying next semester. Project Parivartan seems to have been the sole reason for such an unprecedented hike in fee. Research facilities and labs almost remain the same which is evident in the BRICS ranking in which BITS has unfortunately slipped year after year despite the focus on being India’s best research institute. 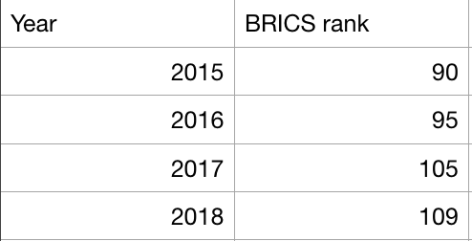 What leaves to be desired by the three sides of this coin ? The administration of course wants BITS to reach greater heights both in the Indian and International domain. Looking at the rank trends , there seems to be an issue with prioritising things that need to be undertaken. After-all the new buildings are only as much worth as the students who will be studying in it. If the fee goes on increasing like it is and with no extra facilities, BITS Pilani might start losing its charm. One of the main motive of our founding father Sri GD Birla ji was to provide quality and affordable education. Quality cannot be objectively defined in one post and being a student of Pilani and having visited many institutions for internships and otherwise, I personally feel that the BITS curriculum is one of the most complete in the country. Affordability is an issue as a student taking admission in 2018 will end up spending in excess of 20 lakhs (including everything) for a four year degree and in excess of 25 lakhs for a dual. These are incredible figures. The administration needs to realise that unless  a check is made on these hikes it is going to get gloomy in the coming days.

The students and the alumni were more than united on this issue but a sudden turn of events has hugely divided the junta. Some alums feel that the way students are putting the issue up to the authorities is not cordial. The students however haven’t really taken to violence or civil disobedience. They are just frustrated. Frustrated with the administration who seems to be taking a lifetime to settle down on one table and sort this out. Frustrated with the lack of attention their own professors are giving them. Frustrated because of being treated as cash cows. More like ATM machines. Same is the case with the alumni. Many have accused the administration of involving them in decision making only when they are in need of funds , which is extremely sad.

The administration is planning to release a statement today. The student body is eagerly waiting for a positive response. In a period of high emotions and high drama students also need to realise that we are not dealing with mafias here. We are dealing with professors and educators. We must remain calm and think twice before taking any action.

Whatever is taken by force can only be kept by force.

This certainly does not mean stop asking questions. Ask the tougher questions.Get into a dialogue. No censorship. Straight questions for straight answers. No fake news. Keep it real.

We as BITSians have the intellect to properly reach an amicable solution as force is not our friend , but the pen is. As the BITS logo says :

Let us take what is ours with reason not force.